Despite lingering uncertainties surrounding the EB-5, Chinese investors are still keen on the US.1

Chinese already account for 90% of EB-5 visas issued by the US government2, and although the EB-5 visa scheme is currently facing a possible demise or price hike after the 28 April 2017 deadline3, Chinese have remained steadfast in their desire to migrate to the US.

The Chinese love affair with the EB-5

The EB-5 has long been regarded as an effective way of emigrating to the US, especially with Chinese.

Over 35,000 Chinese have received green cards for the US through the EB-5 investor visa programme, generating $14 billion in investment and 200,000 jobs.

However, its fate is now up in the air as US legislators continue debating whether to introduce reforms, such as tougher oversight and raise the minimum qualifying investment from the current $500,000 level, or to scrap the EB-5 scheme entirely.

Faced with such possibilities, the EB-5 has seen a wave of Chinese rushing to apply before the deadline – EB-5 related searches on Baidu, China’s largest and most-used search engine, were at a high for 2017 YTD on 29 March as prospective Chinese investors hustled to find out how to get involved in the scheme ahead of the cut-off date. 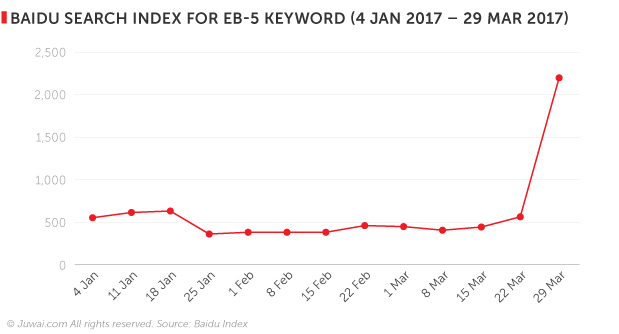 However, while there has been a wave of Chinese rushing to apply for the EB-5 visa before 28 April 20172, some Chinese investors – tired of the long wait of up to 8 years for their EB-5 approval – are now opening up to the prospects of the L1 visa in the US, an attractive alternative to the EB-5 visa.2

Chinese investors explore other visa options in the US

Targeted at company managers, executives and founders, the L1 visa offers the right to live and work in the US for up to seven years, and may be used as a pathway to a green card or residency through an EB1C visa.2

With the estimated wait time for a L1 visa being merely four to six months, compared to an estimated 5-8 year backlog for the EB-5 visa, and the L1 visa doesn’t have the same minimum capital investment rules that a EB-5 does.

“When immigration experts begin explaining the L1 visa to them, as much as one third of EB-5 applicants that we work with will likely prefer it. What they want is the least uncertainty, the shortest timeframe and the lowest cost possible,” said Charles Pittar, CEO of Juwai.com to Forbes.

Beyond the L1 visa, Chinese investors are also considering the EB-1 visa, which is given to priority workers in their field or practice, and may appeal to high-achieving Chinese professionals or entrepreneurs who have built publicly listed companies.

Under current proposals, the number of EB-1 visas issued per year is expected to grow by 28.6%, which bodes well for the programme that is already gaining popularity with Chinese applicants.

How would this impact Chinese real estate investment in the US?

Having spent $27.3 billion on US residential real estate between April 2015 and March 2016, Chinese are already the largest group of international investors in the US.1

Would the potential demise or tougher reforms of the EB-5 deter Chinese buyers from investing in the US, though? We don’t think so.

Asides from the fact that Chinese are warming up to alternative visa options, such as the abovementioned L1 and EB-1 visas, let’s not forget that Chinese buyers can also leverage the 10-year multiple entry visa that was introduced back in 2014 to enter the US and invest.

In other words, the EB-5 predicament is not likely to have much of an impact on Chinese who want to purchase real estate in the US without the intent to migrate, such as those buying purely for investment purposes or for children’s education in mind.

In fact, despite reports of tighter controls on capital leaving China, Chinese views for the US grew 42.7% y-o-y on Juwai.com in February 2017. Clearly, the US still reigns as the #1 investment destination for Chinese property investors on Juwai.com, and it would seem nothing can shake or sway its popularity with Chinese.