Two biggies in real estate & both have to do with DISCLOSURE:

The seller and their agent need to disclosure hear-say, as well as facts. What does this mean? Hear-say can just be a passing comment from a neighbor, relative or disgruntled someone. But once it’s heard, it has to be disclosed, the source attributed and then disclaimed as not having been verified or confirmed.

You think that’s over the top? Well listen up:

A recent Court case that resulted in the rescission of a home sale illustrates this point. A property was sold to buyers who were informed shortly after closing by the neighbors next door that they had plans for an extensive remodel of their home, which would expand the neighbor’s property and permanently block the west facing view from the buyer’s new home. The remodel would also take two years to complete. This information had not been told to the buyers although it had been told to the agent and presumably was known by the sellers. The buyer filed for arbitration to rescind the sale and won. In addition, the arbitrator awarded the buyer more than $1 million for legal fees, costs and interest. The case continued on to the Appeals Court, and the appeal was overturned so the case will go back to court, maybe in two years…..

Email or call me if you’d like to discuss more examples of this thorny issue, or to request a more detailed summary of the full case as provided by Steve Sorrell, esteemed Pasadena attorney.

A more local note about Disclosure in Pasadena:

The City of Pasadena has introduced an option for sellers to self-inspect their homes to obtain the required City Occupancy Inspection. Self-inspection means that the sellers and their agents have the option of completing the City Occupancy Inspection report as opposed to having a City Inspector come to the house to do so. While some people who have some unpermitted space have said whoopie, I caution against it as it will result in a transfer of liability to the owner and could result in some nasty after close of escrow disputes. 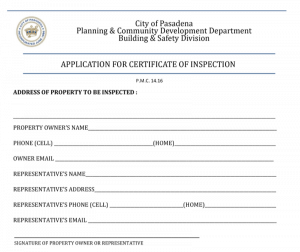 The City of Pasadena has now updated their website for the Occupancy inspection. Until very recently, you could schedule an inspection and pay for the fees online. The recent changes show the new system with the option to self-inspect the property but there is no online ordering system.